Thanks for helping keep our in-person classes safe with one-time proof of vaccination (masks are optional). ×

Cynthia enjoys combining several ancient and modern healing systems for health of body, mind and spirit, including Yoga, Energy Medicine, Tai Chi and Qigong. She began practicing yoga in 1989, when she was working as a Landscape Architect for Sasaki Associates in Watertown Mass. “Yoga became a very important thread in the tapestry of my life, at times becoming a safety line.”

She began teaching Creative Movement for the Jewish Community Center of Northern Va in 2002, Yoga at Sun and Moon Yoga Studio in 2003 and Chinese Yoga (Tai Chi and Qigong) at Sun and Moon in 2015. She has completed Sun and Moon's 500 hour teacher training program has completed a 200 hour Teacher Training with Roger Jahnke of the IIQTC (Institute of Integral Qigong and Tai Chi).  She is now training to be an IIQTC  Senior Trainer to offer teacher trainings in the DC area. She supports the community by offering several free classes for Girl Scoot troops and volunteering time for Peaceable Dragon events including World Tai Chi Day (the last Saturday in April at Meadowlark Gardens in Vienna) 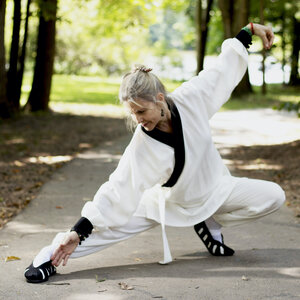