John was led to yoga through a continuum of mind-body practices including Tai Chi Chuan, Neigong, and Japanese tea ceremony.  He began teaching in 2011 after completing his RYT-200 at Sun and Moon. John has practiced Iyengar alignment-based yoga extensively and has a keen interest in it and the lineages of practice that have followed from the other students of T.K.V. Krishnamacharya. Since 2013 he has maintained a consistent daily morning Ashtanga practice, never having imagined that he would be getting up so early for yoga!  He sees all styles of yoga as facets of the greater yoga tradition and he has a special love for Sanskrit study, seeing it as a way of deepening his connection to the tradition and the practice. John leads a monthly discussion group at Sun & Moon dedicated to the study of Sanskrit chant which is currently focused on the Bhagavad Gita.

In his own classes, John focuses on the primacy of the breath in, and between, poses to focus the mind and create space and stability within the body, allowing students to deepen self-awareness in their own practice. 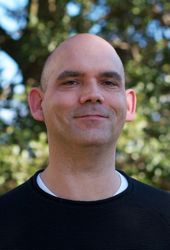